Welcome to Marjolein Kruijts blog with the latest news and articles. Enjoy!

Mystical old cultures are very inspiring for me. It helps me making up stories which will be the basics for a new design or create symbolic paintings. I’m not into using decorative elements of old cultures, like the Egyptian hieroglyphics. They have to be some sort of context, and mean something so it adds to the painting. This way I am creating a story that gets to me. And there has to be an interaction for the viewer to start thinking! What am I looking at here? What story is hidden in this piece? I did some research on cats in art. In my 1st book

History of Cats in Art

For centuries, cats have played a role in art, especially in an applied or symbolic way. For example the hieroglyphics of the Egyptians. In the seventeenth century, cats made a return to the scene as a decorative element, an afterthought, in portraits commissioned by their right owners. In the end of the nineteenth century, the status of the cat changed to that of ‘an animal with class’. It was in that period that Henriëtte Ronner-Knip became known for her paintings and drawings of cuddly kittens. In the period of ‘La Belle Époque’ in Montmartre, Parijs, you could not escape the ‘Le Chat Noir’ poster art, created by Théophile Steinlen. At this point, the cat was more revered for its graciousness. For every artist, the inspiration to paint cats is different (of course). A characterful portrait of a house cat for its owner is something new, dating from recently. As with human portrait artists, the aim of capturing the essence of their soul goes a step further than seen in previous cat art. 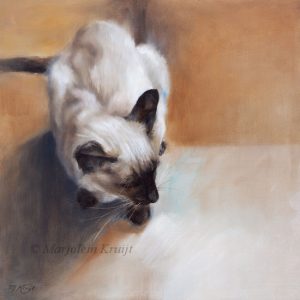 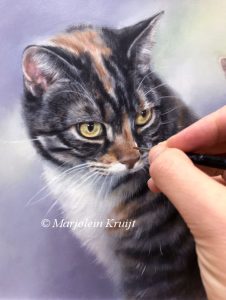 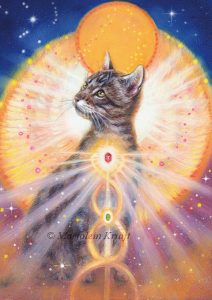 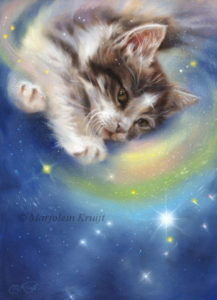 My inspiration for catart
In my own work, I recognise these different approaches to the cat in art by creating an eclectic melange. There is reverence for their soft and elegent appearance and the typical ‘being’, full of character. Sleeping, playing, discovering and sometimes just being funny. You can almost drown in those deep feline eyes. But I also like to go beyond an illustrative approach to capture their subtle sophistication in a piece of work that is also about atmosphere and strong composition.  The standpoint of the observer is that of a spectator, whom the cat (immersed in their own mysterious world) views. Catching the inner animal on canvas, going beyong technique, and seemingly beyond realism, gives me the most satisfaction. View more of my petportraits here.

The power of a feline is also in its ‘Being’: its loyalness to humanity goes deep into the heart. This unconditional (almost angelic) way of loving, which I’m also honored to recieve from my cats, is what I try to capture in my artwork. That doesn’t only ‘lies in the eyes’, it radiates from the whole picture. A portrait with an essence of light. 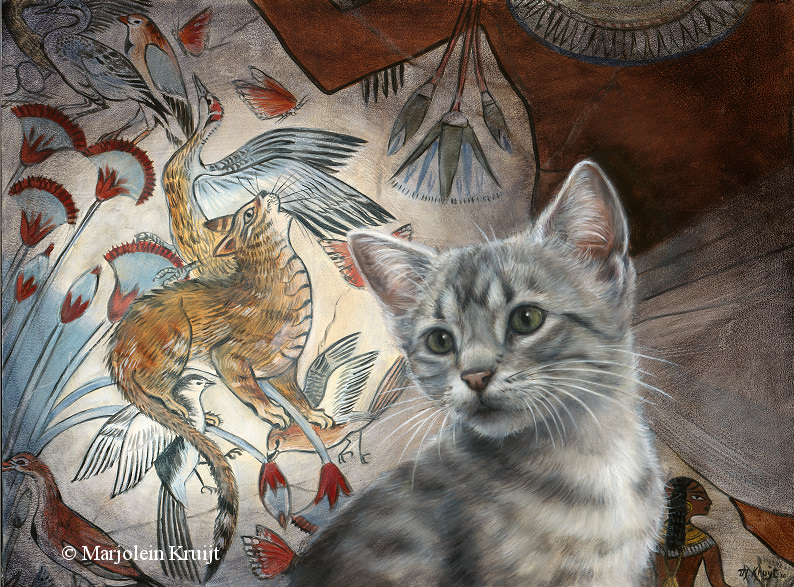 The fragment on the background is of an Egyptian wall painting from the tomb of Nebamin, where a cat catches birds at the side of a fisherman. This is one of the oldest examples of the connection between man and cat. In this painting, it is almost as if I have made the contemporary Egyptian Mau understand this memory, with the buttefly (symbol of freedom) resting on her back. To the right of the Mau, you can just see a human figure who is showing respect to nature (offering). This painting could be seen as a timeline from left to right: from past to present day. Even though she is now largely domesticated, the respect that a contempory cat recieves from her ‘master’ can be reflected within.

Available at Redbubble as Canvasprint or on other products